Fire Chief Tom Peterson was born and raised in Torrance, CA and moved to Templeton in 1987 for a career in law enforcement. In 1990, he joined the Templeton Fire Department as a volunteer firefighter. Starting as a volunteer in Templeton changed his career path causing him to pursue a career in the fire service. Chief Peterson has worked for several departments as various ranks throughout San Luis Obispo County such as, Diablo Canyon Fire Department, San Miguel Fire, South Bay Fire, and Cambria Fire. He worked through the ranks with Atascadero Fire & Emergency Services for 16 years leaving as a Batallion Chief to serve the community of Templeton as our full-time Fire Chief in early 2020.

Chief Peterson has lived in Templeton for the past 34 years with his wife, raising two children and now one grandchild. He loves water sports of any kind such as, water skiing, wakeboarding, and fishing. He also enjoys skiing and snowboarding in the winter. Whether it is a simple woodworking project or remodeling, Chief Peterson loves to build.

Chief Peterson’s best advice for future firefighters is to have pure motivation. That motivation should be to become a public servant and serve the community you work for. Also, Chief’s advice is, “If you always put your family first and foremost, then you will still have your family after you retire from your career.” 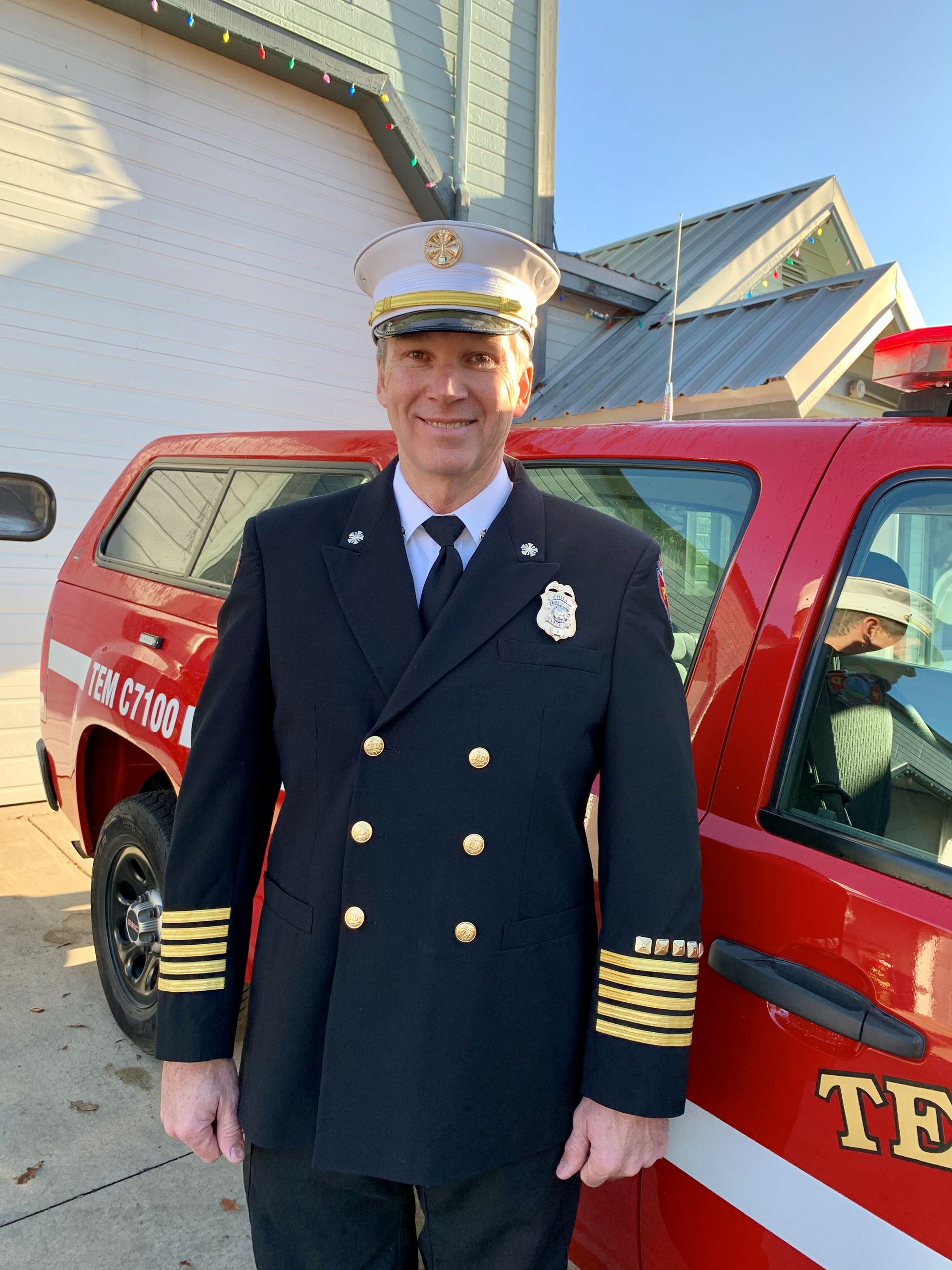 Fire Captain Brandon Wall was born and raised in Chino, CA. After 12+ years of playing baseball, Brandon attended Allan Hancock College and Columbia Southern University. He started his fire service career as a Paid-Call Firefighter with CAL FIRE SLU Station 21 out of the San Luis Obispo County Regional Airport. He then moved on to the position of a Seasonal Firefighter for CAL FIRE in the San Luis Obispo Unit. Brandon was also a Reserve Firefighter for Atascadero City Fire Department. While working as a Paid-Call Firefighter, he worked full-time as an equipment operator and Senior Roadworker for Monterey County Public Works. In 2008, Brandon started as a Volunteer Firefighter for Templeton Fire and was hired full-time as the Training Coordinator in 2011. Captain Wall has been an essential part of Templeton Fire & Emergency Services as the department transitioned to 24/7 staffing and now holds the title of Fire Captain and Training Officer.

When Brandon is off-duty, he enjoys trap shooting, hunting, and watching his favorite team, the San Francisco Giants. He currently resides in Templeton with his wife of 21 years, JoAnn. They have two children, JoEllen and Aiden, two dogs, and a diabetic cat. Captain Wall is dedicated to the Leukemia & Lymphoma Firefighter Stairclimb and is currently a California Ambassador and Team Captain for the Templeton Fire Stairclimb Team.

Captain Wall's best advice for future firefighters is to always work hard and gain experience along with your education. He believes in having a strong support group to help you through the process. 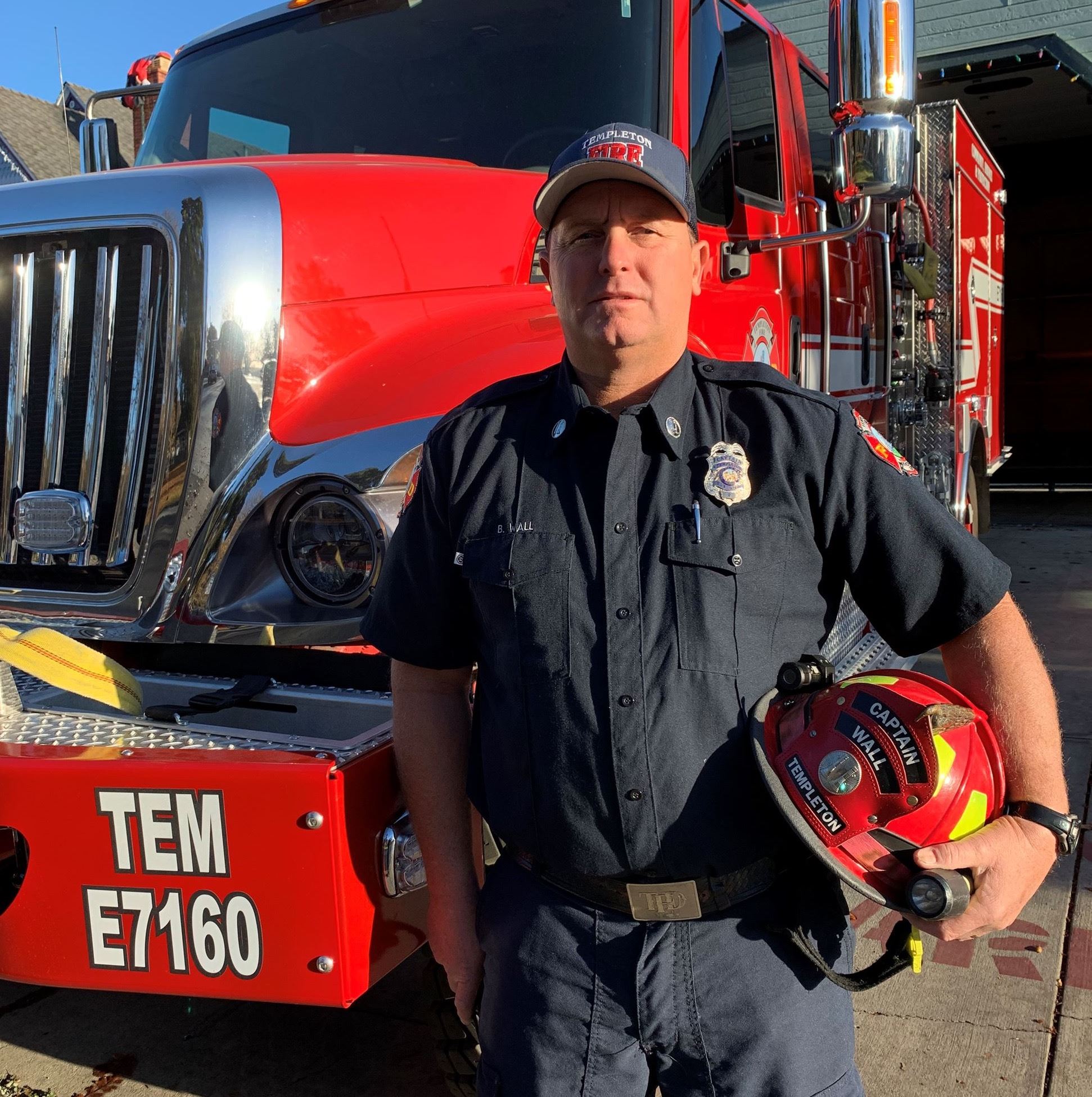 Fire Captain Phillip Goldbloom was born and raised in Southern California and then moved to Grover Beach in 1986. He began his fire service career with Oceano Fire Department in 2002 as a Volunteer Firefighter and worked his way up to the rank of Engineer. In 2006, he moved to Northern SLO County and worked as a Paid-Call Firefighter ranking up to Company Officer for CAL FIRE/SLO County Fire.  Phill was hired by Templeton Fire & Emergency Services in 2014 and worked his way up to the rank of part-time Fire Captain. In 2016, he was hired full-time by Camp Roberts Fire Department and worked there until he was hired as the second full-time Fire Captain for Templeton Fire & Emergency Services in March 2020. Captain Goldbloom is a CA State Certified Fire Officer, Haz-Mat Decon Instructor, and a Mobile Communications Technician.

Fire Captain Phillip Goldbloom’s best advice for future firefighters is to never forget where you came from. Regardless of rank, always stay humble and continue to learn everyday. 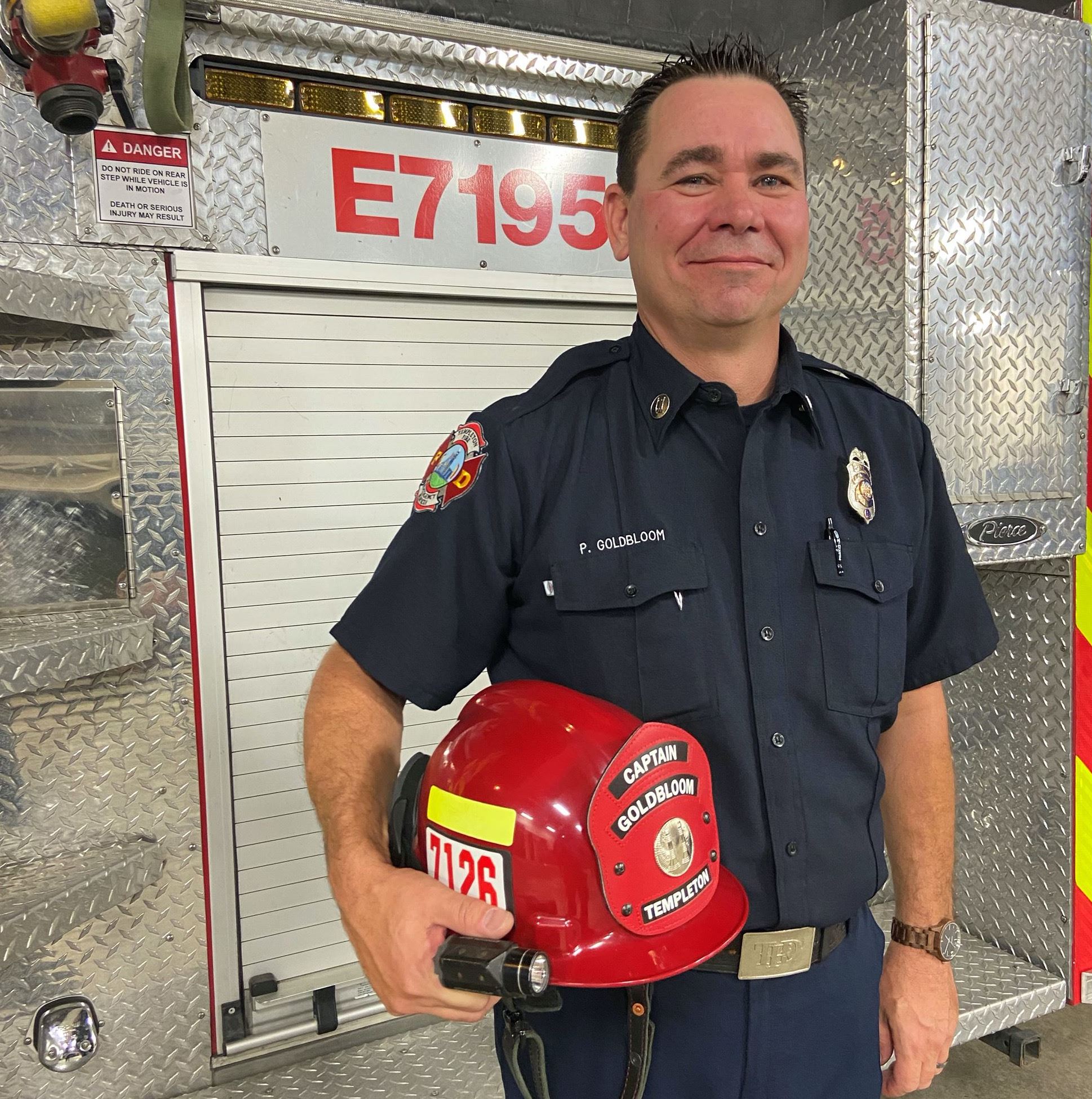 Fire Captain Andrew Klein was born in San Luis Obispo, raised in Arroyo Grande until grade school, and moved to Orcutt. He started his fire service career in August 1998 as a Fire Explorer with Orcutt Fire Department Post 2335. On his 18th birthday, Andrew was hired as a Firefighter with Orcutt Fire and spent five years there. In April 2004, he was hired with Vandenberg Fire Department as a Hot Shot for three years, then promoted to the operations side as a Firefighter. During his time with Vandenberg, he rose to the rank of Engineer and Acting Captain. In January 2014, Andrew was hired by Santa Monica Fire Department and spent seven and a half years there. For most of his tenure, he worked at headquarters working on Engine 1 and Truck 1. During his off time, he spent over ten years teaching at Allan Hancock College's Fire Academy as a Training Officer.

Captain Klein currently lives in Orcutt with his wife of ten years, Alexandra, daughters Audre, Addison, Austynn, and one boy on the way. His hobbies include chasing his kids around, staying fit, and photography. Some of his award-winning photographs have been featured in several publications for many years such as Firehouse, JEMS, and FireRescue.

Fire Captain Klein's best advice for future firefighters is to never give up. No matter how big the dream or challenge might seem, as long as you have the drive, focus, and support network from your friends and family, you can do anything. His favorite quote is: "You just can't beat the person who won't give up." -Babe Ruth 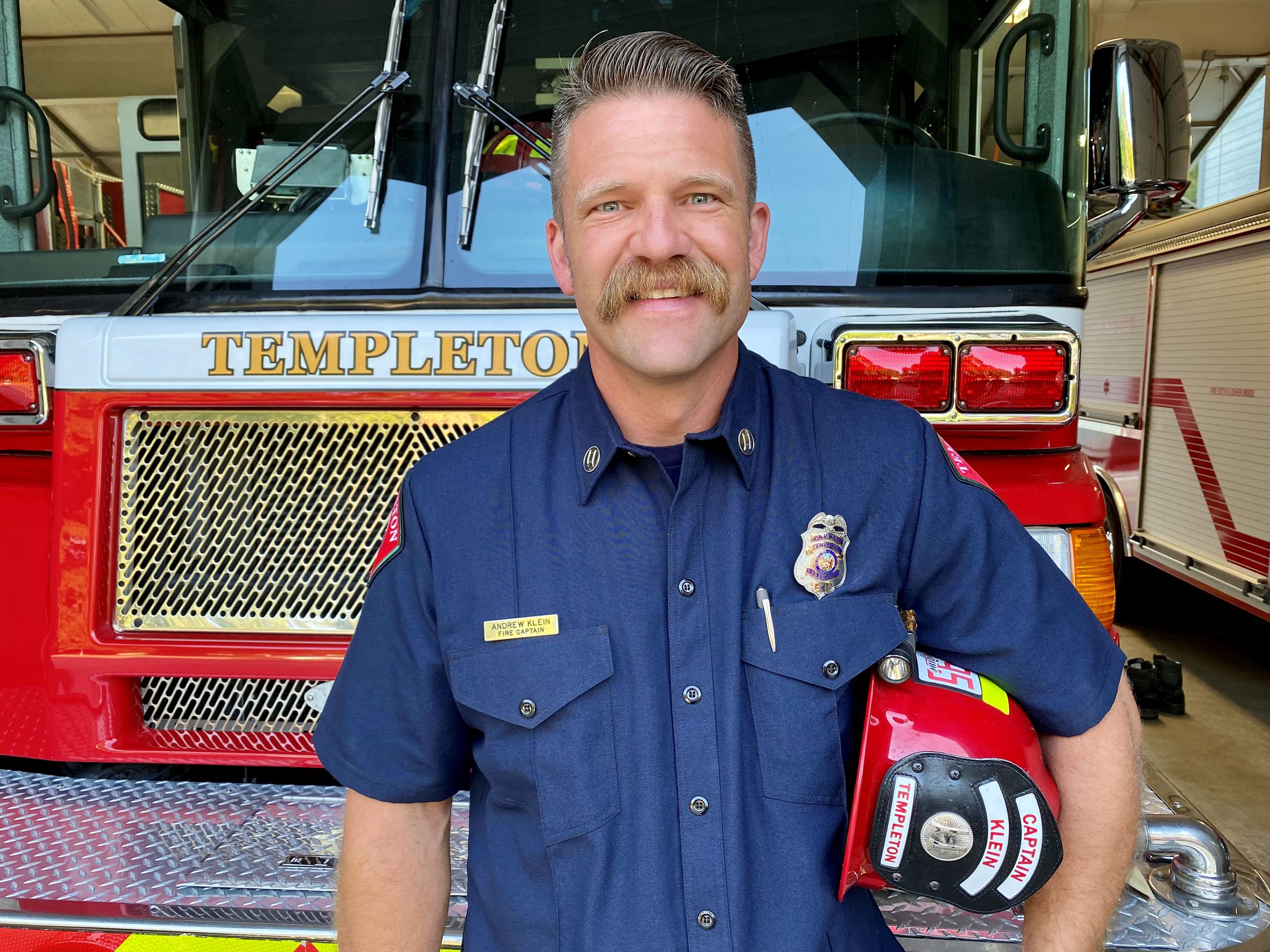 Fire Engineer Robert Baker was born is Bakersfield, but raised in Tehachapi. In 2008, he worked one season on Kern County’s helitack crew prior to graduating Chico State in 2013. Rob worked as a project engineer on heavy civil construction projects before pursing a career in the fire service. In 2017, he graduated from Butte Fire Academy and started as a seasonal firefighter for CAL FIRE in the San Luis Unit. He accepted a full-time position with Kings County Fire Department in July 2019 and spent two years there until getting hired as the Fire Engineer for Templeton Fire.

Engineer Baker currently lives in Templeton with his wife Danielle, son Cash, and their rescue dog Scout. He enjoys working on his house, woodworking, snowboarding, and spending time with his family.

Rob’s best advice for future firefighters is to never stop learning, enjoy every minute of it, and show respect to everyone who helps you along the way. 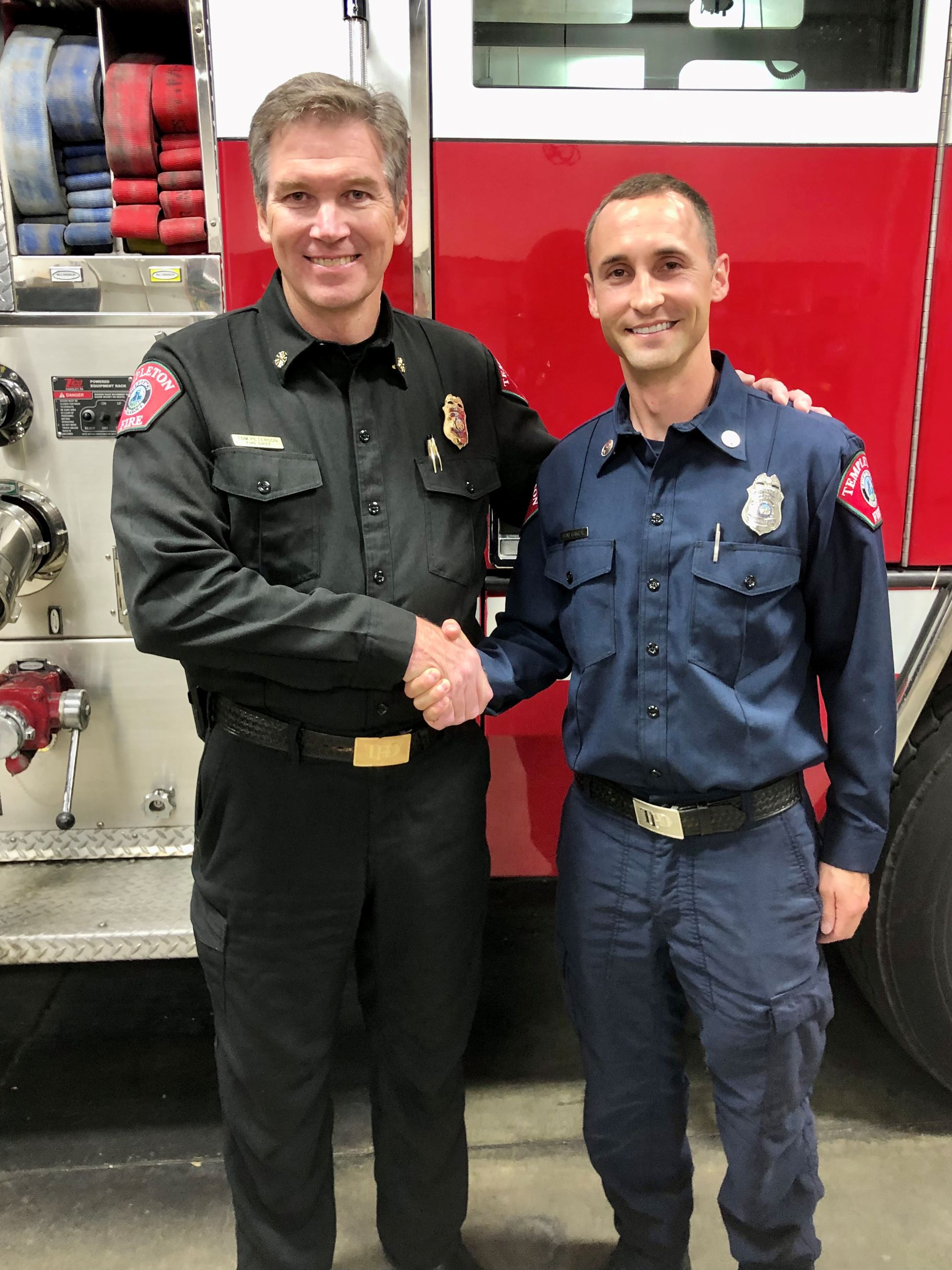